“Crimea is and always will be part of Ukraine,” said Refat Chubarov, leader of Crimean Tatar people, addressing the audience of some 100 people at King’s College in London on March 24, 2016. Mr Chubarov spoke extensively about the situation the Crimea Tatars, an indigenous population of Crimea, found themselves since the peninsula has been annexed by Russia in early 2014.

He mentioned numerous human rights violations against the Crimean Tatar population which has been actively resisting the Russian takeover: kidnappings, imprisonment on trumpeted charges, closure of Crimean Tatar media and a campaign of harassment against the Crimean Tatars bodies of representation: their assembly, the Kurultai, and an executive body, the Mejlis, of which Mr Chubarov is a Chaiman. “We are ready for the closure of Mejlis,” Mr Churarov said, commenting on the legal move in that direction, made by the Prosecutor General of Crimea. 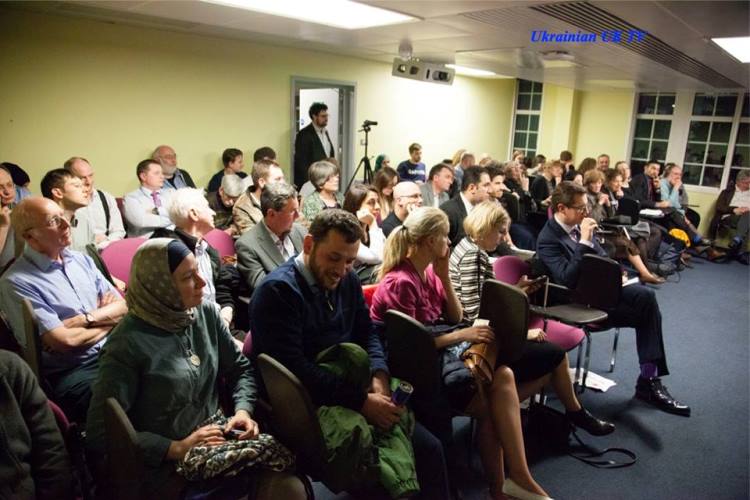 The lecture was preceded by a screening of a documentary by an American producer of a Ukrainian descent Christina Paschyn entitled “A Struggle for Home: The Crimean Tatars”.  The film featured the tragic history of the Crimean Tatar people through the centuries, including the 1944 deportation, and a dramatic change for worse the community experienced since the annexation. The story was told through a wide range of voices and evoked an emotional response from the audience. “Sadly, some of those features in the film, are no longer with us,” Refat Chubarov commented.

The event was moderated by Dr. Simon Waldman of Middle East & Mediterranean Studies, King’s College London and was held in partnership with Research Turkey, a think tank providing research and analysis of Turkey-related issues. The audience included representatives of the Ukrainian, Turkish and Crimean Tatar communities in London, diplomats, political activists, academics and journalists.